(This is only my second post in english, wich is not my first language. I hope that native english speakers won’t judge my unpracticed school english in a too harsh way). 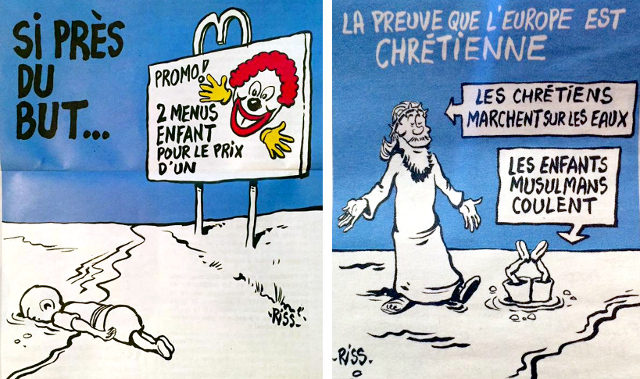 The left image says « So close to the goal ». The poster showing some kind of Ronald MacDonald says « Bargain! Two children meals for the price of one ». The right cartoon states « evidence that Europe is christian. Christians walk on water. Muslim children sink ». Both drawings are a reference to the three years old boy Aylan Kurdi who died drowning while trying to cross the Mediterranean Sea with his parents, all the family fleeing far from Syria.

I guess I have to introduce myself first. I am a nearly 47 years old french arts teacher. Politicaly, I’d describe myself as an ecologist and an anarchist. This means in my case that I don’t support gods, kings, nations nor borders, and that I consider that our world is small, delicate, beautiful and important. I guess money, law and politics are useful tools but I’m not very satisfied of what they become when they stop beeing everyone tools to become oppressive powers. I don’t hate people of any category (beliefs, origins,…), but I can’t like people on such theorical basis either: I only can appreciate individual beings for who they are, not for what they are. For myself as for others, I love freedom, knowledge, reason and creativeness.
And I also love humor. And that’s my subject here. 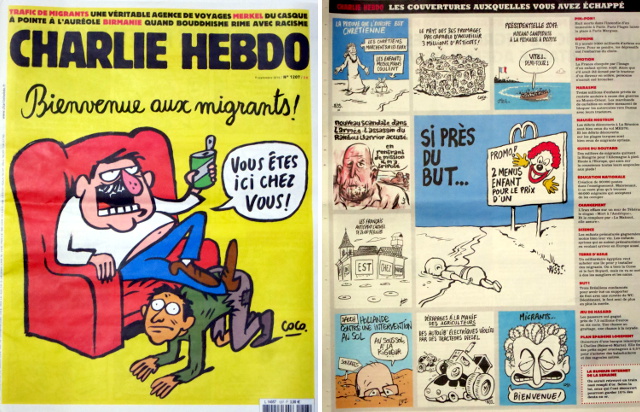 I can’t understand why but on Twitter and on medias such as Morocco World News, The Independant, The Daily Mail, etc., is spread a fake cover of Charlie Hebdo with the Aylan/Ronald MacDonalds drawing. The actual cover of september the 9th issue (#1207) shows a filthy frenchman in a chair with a beer in the hand, using a migrant as a coffee-table and saying « make yourself at home ». The caption says « Welcome to migrants ». The two controversial drawings actualy come from the back page of the newspaper, and are surrounded of other drawings that mostly depict France and Europs as very selfish to the migrants.

There is a french saying stating that « Humour is the courtesy of despair ». (« L’humour est la politesse du désespoir » — the author of the sentence seems to be french movie director Chris Marker). Even though humour is many other things, I like this aphorism, it means to me that that humour is a way to fight sad events, and the sadest and hopeless one of all events: death.
People who just make fun of others, who mock others, don’t make very good humour, if any humour at all. Of course, a falling, a strange outfit, a funny face or a stupid action can make laugh, but this is not humour. A form of humour that just tries to make fun of others is, I think, never funny — or at least never funny as it intends to be.
Humour doesn’t work in the same way everywhere: it doesn’t cross borders very well. It’s a well-known fact, but it became possible to verify it quite well with the Internet: now, a french cartoon can be spread all over the world in a minute. And even though I know that people don’t laugh of the same things everywhere, the brutal international reaction to the two drawings displayed at the begining of this page was completely unexpected to me. 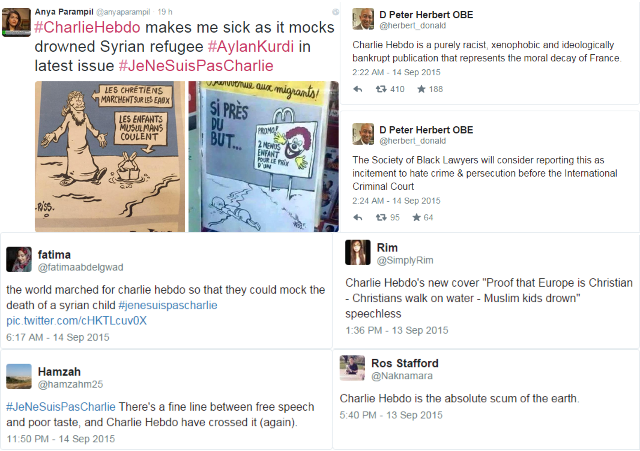 See for instance  Charlie Hebdo Reopens Freedom Of Speech Debate With Cartoons Depicting Death Of Aylan Kurdi (the british Huffington Post) or Charlie Hebdo Mocks The Death of Syrian Child Aylan Kurdi (Morocco World News). Those papers, the tweets they reproduce and lots of the comments made after them seems to have understood that Charlie Hebdo’s team think that a kid’s tragic death can be considered as a funny thing, and that there would exist a miraculous superiority of Christians to Muslims.
As a french person, knowing Charlie Hebdo since thirty years at least, I don’t read these drawings this way at all. It is obvious to me that the first one is performing a crual visual oxymoron between a great unfortunate hope for a better living (or even for the right of beeing alive), and the pathetic artificial joy of consumerism. It tells that you have a very different life depending on the side of the sea you were born.
As Charlie Hebdo’s drawers are all more or less atheists and have always made fun of all religions, especially Christianism, showing Jesus walking on water is a mocking of bigotry. Of course, Christians don’t float while Muslims sink. But it’s not only about bigotry, as Christians with a deep faith also know they sink in water. It has a second meaning about an actual injustice: while thousands of Syrians (but also Erythreans, Sudanese, etc.) risk their life to cross the sea, this very same sea is, for most Europeans, a place for hollydays. So it is in a way true to say that this same place is not the same for all.

Three other cartoons from the same issue. The left one shows Jean-Marie Le Pen, the senile founder of Front National, France main’s nationalist political party, who has been expelled from his own organization for beeing too obviously racist. Here, it is said « more and more racist, Jean-Marie Le Pen creates his (new) party », and the guy says « Bleu blanc rouge » (blue, white, red), that is the french flag’s colors, but can also remind the dead boy. The middle drawing shows two fat tourists and a voice asking them to move, attributed to a photographer who « ruins holliday ». The third drawing says « Welcome on Children island », refering to a 1970s french kind of Sesame Street called « Children island ». The two first drawings are criticizing something from France (fascism, tourism), and the last one just creates a gap between two kinds of childhood: television fun for the French and pain or death for the little Aylan.

I’m usually not very fond of Riss, the cartoonist, but I happen to think these two pecular drawings are quite good ones. I nonetheless can get why some people judge insensitive or disrespectful to recall a so terrible tragedy in a drawing intended to be funny. It seems that british people are very sensible to this decency question. But people who have never read Charlie Hebdo must know that it’s a normally gross and disrespectful newspaper with, very often, that kind of macabre humour. They must also be aware that it’s not a newspaper about Islam, they treat every news subject the same way, and they did that even about the life threats they received, and they even tried to stay funny while talking about their own tragedy of January 7th, 2015, when a part of their team has been murdered by some young french guys claming to kill in the name of the muslims of the whole world. As french newpapers talk very much about refugees, these days, Charlie Hebdo does the same. The following drawing shows the little Aylan boy in cover of any french paper:

(I had to cut the image in three parts, it was to high) The picture shown is each time the little Aylan Kurdi, but the titles makes fun of the newspapers usual subjects. For Instance, far-right magazine « Minute »‘s caption is « a 3 years old terrorist counteracted by the tide ».

So I understand why some get upset or uncomfortable about respect issues, even though I’d like to point out that what is actually awful is not drawings — a little bit of ink on paper —, but the real story it is about: thousand of refugees sunk in the sea while trying to get a better life.
I also can understand well why a lot of people don’t think it is funny, as what it is about is definitely not funny.

What I can’t understand at all is how the two controversial drawings could have been understood as anti-refugees, anti-Islam or racists. My very first feeling is to ask myself how it is possible to be that blind (I use the world blind not to be too rude or arrogant). I suppose there are two reasons for that. The first is that this kind of dark humour is quite common to most french people (Charlie Hebdo will turn 45 years old in a few weeks), but is quite far to today’s international political cartoons. It can remind, though, excesses and quite bad taste of some british satirists of the end of the XVIIIth century, as Thomas Rowlandson, Isaac Cruishank and James Gillray’s, for instance. For people who live in countries with no freedom of speech at all, where criticizing the dictator, religious people, or the army can lead to jail, Charlie Hebdo‘s existence must be quite impossible to comprehend.
Another reason I see is that the smear campain against this satirical paper had succeded: it is so easy to tell what is in a journal when it is not to people who can’t and won’t read it. To take a few drawings among hundreds and to say « See what this paper says against you ».

Some of the few excessive reactions to the cartoons. Some call for a new murder, some say the murderers did well, some think that Charlie Hebdo is a jewish paper and it doesn’t seem to be a reason for love and understainding for them, I’m afraid. A lot think that the Jesus drawing is the more outrageous. A lot of people seem to believe that « Charlie Hebdo » is a person. Actualy, « Charlie » comes from « Charlie Brown », and « Hebdo » just means « Weekly ».
Among the commentaries, I also read people for all over the world saying that they couldn’t understand how people could understand these drawings as racist.

France has some deeply racist and insensitive persons, for sure. Those ones don’t make drawings about a three years old kid. They ask newspapers not to show his photography, not for decency but because they know it can change the audience’s mind about refugees. They tell the only fault is the boy’s father’s, who shouldn’t have put his life in jeopardy. Some even tell it is a conspiracy, that the boy didn’t exist, or that this boy’s father was not a refugee but a people smuggler. They think that Europe is much too generous and they say that refugees must be rejected as they are terrorists in disguise. Charlie Hebdo says nothing of that and, on the contrary, mocks these racist people.

On me trouve aussi ici :